John the Forerunner, the beginning of the joy-bearing message about the coming of our Christ in the world, ceaselessly preaches the gospel of salvation for about two thousand years: “Brethren, prepare the way, make straight the paths of your hearts, He is coming, who is incomparably stronger than me, He, of whom I am not […]

The Byzantine icon of the baptism is the icon of the Holy Trinity. The Son in the streams of the river. The Spirit of Truth, in the form of a dove, is above the divine head of the Word. And above, the presence of the Father is made sensorial with a band of lines, a linear depiction of the divine voice: “This is my beloved Son…” At the lower part the river, with greatly pouring, much flowing, a visible symbol of the wealth of the given saving grace and gift.

In the Middle East, the Arab Spring has given way to a Christian Winter 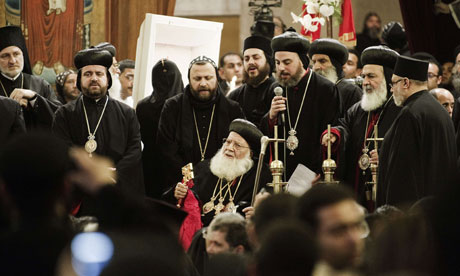 The line about the American general meeting the Arab Christian isn’t as familiar as it should be. “When did your family convert?” the general asked. “About 2,000 years ago,” the Arab answered wryly. The general’s ignorance is widely shared. Take but one example from closer to home. Over-zealous teachers in London have recently been pulling […]

The Eunuch of Queen Candace

The Apostle Philip baptized this black man, a eunuch. Following his baptism the eunuch returned to his home and began to preach Christ. He was the first Apostle of Faith among the blacks in Ethiopia. “Then the angel of the Lord spoke to Philip, get up and head south on the road that goes down […]

The Assembly (Synaxis) of the Seventy Holy Apostles

Besides the Twelve Greater Apostles, the Lord chose Seventy Lesser Apostles and sent them to preach the Gospel, “After these things the Lord appointed other seventy also, and sent them two and two before his face into every city and place He intended to visit, He said to them, ` The harvest is abundant but […]

Malachi was the last of the prophets in time. He was born after the return of the Hebrews from the Babylonian Captivity in 538 B.C. He was unusually handsome in countenance. According to legend, the people called him an angel, perhaps because of his external beauty or because of his spiritual purity, or even, perhaps […]

Saint Thomais the Righteous of Lesvos, Protector of the Married Life

St. Thomais was from the island of Lesvos and was born between 910-913 AD from pious and rich parents. They were childless, but with the Grace of God and the intercessions of the Panagia, they brought the Saint into the world. The Saint, after pressures and great desires of her parents, was married to a […]

The Great Feast of Theophany

Theophany is the Feast which reveals the Most Holy Trinity to the world through the Baptism of the Lord (Mt.3:13-17; Mark 1:9-11; Luke 3:21-22). God the Father spoke from Heaven about the Son, the Son was baptized by the St John the Forerunner, and the Holy Spirit descended upon the Son in the form of […]

Friendship in Late Antiquity: the Case of Gregory Nazianzen and Basil the Great 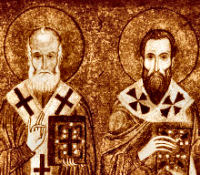 I.Introduction: Classical and Christian Friendship One thing we should expect to find unchanged when we look at the new world that emerges during the Christianization of the Greco-Roman Empire is the fact that people continue to form friendships and, as friendship often leads to, continue to consider and reflect on the nature of friendship as […]

Ammon was a great ascetic of the fifth century. He was the abbot of the Tabennesiote Monastery in Upper Egypt. He was one of the most venerated ascetics of the Nitrian Desert, and Saint Athanasius mentions him in his life of Saint Anthony.     Ammon (or Amon), St., the founder of the celebrated settlement of […]