REJOICING IN THE DESTRUCTION OF THE UNGODLY?

As the time approached for him to be taken up to heaven, Jesus resolutely set out for Jerusalem. And he sent messengers on ahead, who went into a Samaritan village to get things ready for him; but the people there did not welcome him, because he was heading for Jerusalem. When the disciples James and […]

MONASTERY OF DORMITION IN MEDAN 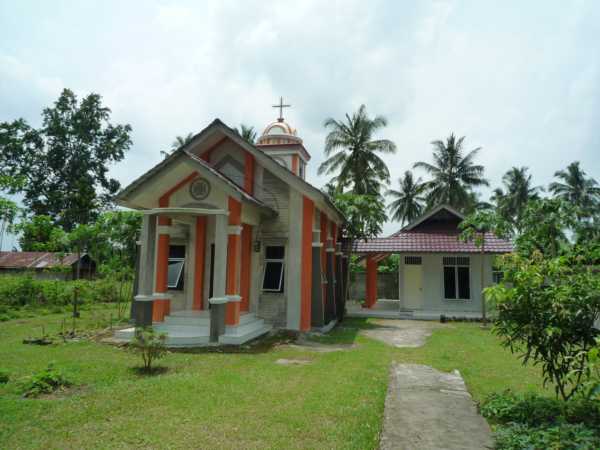 Metropolitan Nektarios during his stay in Medan visited the Monastery of Dormition of the Theotokos. The Monastery is the first Orthodox monastic foundation in Indonesia.

Metropolitan Nektarios during his stay in Medan visited the Clinic “Theotokos”. Metropolitan had the opportunity to meet the staff of the Clinic and to discuss with them various issues as well as to supervised the works of expansion of the Clinic.

CELEBRATION OF THE FEAST OF SAINT GEORGE AT THE PHANAR

On Bright Monday, April 25, 2011, Metropolitan Germanos of Tranoupolis presided over the concelebration of the Divine Liturgy, together with Metropolitans Demetrios of Sebasteia and Stephanos of Kallioupolis and Madytos for the commemoration of St. George the Great Martyr, Patron Saint of the Patriarchal Church at the Phanar. His All-Holiness was present in the sacred […]

AGAPE VESPERS AT THE PHANAR

On Easter Sunday, April 24, 2011, His All-Holiness presided over the Agape Vesperal Service at the Patriarchal Church of St. George, assisted by Hierarchs of the Throne: Metropolitans Evangelos of Perghe, Joseph of Proikonnisos, Meliton of Philadelphia, Demetrios of Sebasteia, Gennadios of Sassima, Elpidophoros of Proussa, and Bishop Theodosios of Devoleos. In attendance were Protopresbyter […]

PASCHA AT THE PHANAR

On Sunday, April 24, 2011, thousands of pilgrims participated at the Resurrection Service presided by His All-Holiness at the Patriarchal Church of St. George. In attendance were Mr. and Mrs. Angelopoulos, Greek journalist Lefteris Papadopoulos, Greek Political Party PASOK member and former Minister, Costas Geitonas and many Archons of the Throne from Greece and abroad. […]

CHRIST IS RISEN-NOW WHAT ARE WE TO DO? (AUDIO)

Christ is Risen-Now what are we to do? By Dr.Bradley Nassif Brad Nassif – In this follow-up podcast, Dr. Nassif offers insights into the meaning of the resurrection for our everyday lives. Following St. Paul in 1 Corinthians 15, he reminds us that the gospel must always be of “first importance” in all we do […]

Three timeless truths of the resurrection by Dr.Bradley Nassif. Brad Nassif – From Pascha to Pentecost, Orthodox Christians greet each other with the words “Christ is Risen! Indeed, He is Risen!” What do those words mean? Dr. Nassif identifies three timeless truths about the Resurrection of Christ: Christ is forever alive. Christ conquered death. Christ […]