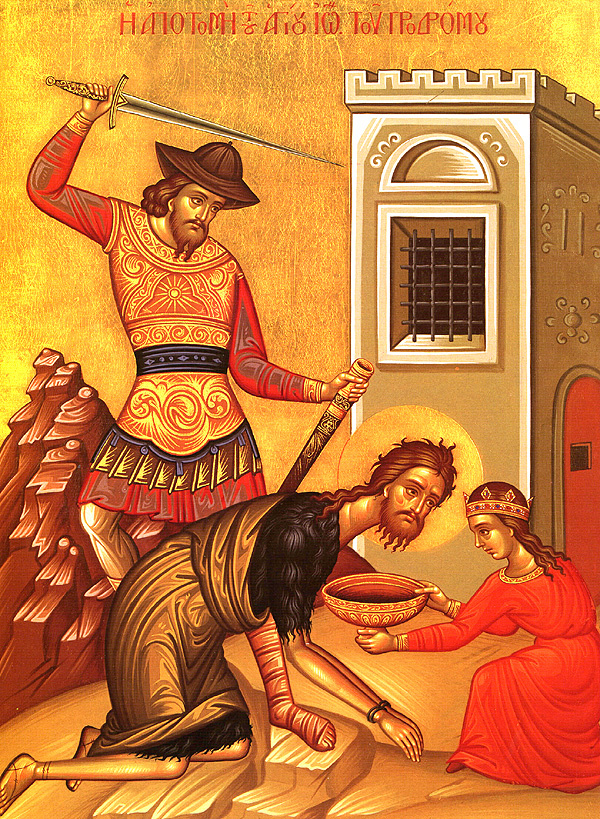 Saint John Chrysostom on the Beheading of the Precious Forerunner

“At that time Herod the tetrarch heard of the fame of Jesus.” (Matt. xiv. 1). For Herod the king, this man’s father, he that slew the children, was dead. But not without a purpose doth the evangelist signify the time, but to make thee observe also the haughtiness of the tyrant, and his thoughtlessness, in that not at the beginning did he inform himself about Christ, but after a very long time. For such are they that are in places of power, and are encompassed with much pomp, they learn these things late, because they do not make much account of them.

Saint Justin Popovich: The Beheading of John the Prophet and Forerunner

Today is a little Great Friday, a second Great Friday. For today the greatest man among those born of women, John, the Holy Forerunner and Baptiser of the Lord, is murdered. On Great Friday, people murdered God, crucified God. On today’s holy great feast, people murdered the greatest of all men. It is not I who chose to use the expression “the greatest.” What are my praises of the great and glorious Forerunner of the Lord, whom the Lord praised more than anyone among men, more than any of the apostles, the Angels, the Prophets, the Righteous Ones, the Sages? For the Lord declared of him: “Among them that are born of women there hath not risen a greater than John the Baptist…” (Мatthew 11: 11). In all Creation, there exists no greater praise.

August 29: The Beheading of the Holy Glorious Prophet, Forerunner and Baptist John

The divine Baptist, the Prophet born of a Prophet, the seal of all the Prophets and beginning of the Apostles, the mediator between the Old and New Covenants, the voice of one crying in the wilderness, the God-sent Messenger of the incarnate Messiah, the forerunner of Christ’s coming into the world (Esaias 40: 3; Mal. 3: 1); who by many miracles was both conceived and born; who was filled with the Holy Spirit while yet in his mother’s womb; who came forth like another Elias the Zealot, whose life in the wilderness and divine zeal for God’s Law he imitated: this divine Prophet, after he had preached the baptism of repentance according to God’s command; had taught men of low rank and high how they must order their lives;

On the next day after the feast of the Baptism of the Lord, the Holy Church glorifies the Forerunner and Baptist John (about him see

John the Forerunner, the beginning of the joy-bearing message about the coming of our Christ in the world, ceaselessly preaches the gospel of salvation for

The Conception of Saint John the Baptist

This came to pass fifteen months before the birth of Christ, after the vision of the Angel that Zacharias, the father of the Forerunner,

Homily on the Feast of the Beheading of Saint John, the Glorious Prophet, Forerunner and Baptist of the Lord

Today is a little Great Friday, a second Great Friday. For today the greatest man among those born of women, John, the Holy Forerunner and

Commemoration of the Beheading of the Holy and Glorious Prophet, Forerunner and Baptist John

The divine Baptist, the Prophet born of a Prophet,the seal of all the Prophets and beginning of theApostles, the mediator between the Old and New Covenants, the voice of one crying in the wilderness, theGod-sent Messenger of theincarnate Messiah, theforerunner of Christ’s coming into the world (Isaiah 40:3; Mal. 3: 1); who by many

The Incorrupt Right Hand of Saint John the Baptist

The body of Saint John the Baptist was buried in the Samaritan city of Sebaste. The holy Evangelist Luke, who went preaching Christ in various The Nativity of Saint John the Baptist

Six months before his appearance in Nazareth to the All-holy Virgin Mary, the great archangel of God, Gabriel appeared to Zacharias the high priest in