SYNAXARION OF HOLY AND GREAT THURSDAY

On Holy and Great Thursday, the Divine Fathers, who ordered all things aright, in succession to the Divine Apostles and the Sacred Gospels, have handed down to us the tradition of celebrating four events: the sacred Foot-washing, the Mystical Supper (that is, the bestowal of the dread Mysteries), the preternatural Prayer, and the Betrayal itself.

Verses to the Foot-washing

God, Whose feet trod in Eden long ago in the afternoon,

Washeth the feet of His Disciples in the evening.

Verses to the Mystical Supper

Twofold is the Supper: for it is the Passover of the Law

And the New Pascha, the Blood and Body of the Master.

Verses to the preternatural Prayer

In Thy Prayer, O Christ, Thou didst show fear,

And let great drops of blood fall from Thy face,

Verses to the Betrayal

What need have ye of swords and staves, O deceivers of the people,

To put to death Him Who is zealous to redeem the world?

Since the sacrifice of the Hebrew Passover, that is, the slaughter of the lamb reared for this purpose, was to take place on Friday, and it was fitting that the type should be succeeded by the truth, that is, that Christ, our Paschal Lamb, be sacrificed on that day, our Lord Jesus Christ, as the Divine Fathers say, celebrated the Passover in anticipation with His Disciples on the evening of Thursday. This evening and the whole of Friday until the evening are reckoned by the Hebrews as a single day; for thus do they count, calling this period a night and a day. Christ celebrated the Passover at that time with the Disciples according to the Law, as some, including the Divine Chrysostomos, have said: first, standing upright, girt, wearing shoes, leaning on staffs, and everything else prescribed by the Law, lest He should seem to be transgressing the Law.

After this, showing the Disciples that which is more perfect, He entrusted to them the Mystery of our Pascha in the upper room, night having already fallen. For when the Supper took place, He sat down with the Twelve.

Note that this was not the Passover according to the Law; for it was a supper, they were sitting down, and there was bread and water, whereas at the Passover everything is cooked with fire and there is no leavened bread. Before they began to eat (this is what the Divine Chrysostomos says), He arose from the supper, placed His garments on the ground, and poured water into a basin, doing everything with His own hands; on the one hand, in order to put Judas to shame, and on the other hand, in order to remind the other Disciples not to seek primacy, as He exhorts them after the foot-washing, saying, “He who desireth to be first, let him be last of all” (cf. Luke 22:24-27) and making Himself an example. It appears that Christ washed the feet of Judas first of all, who had rather presumptuously sat down first, and subsequently came to Peter. He, being more ardent than the rest, restrained the Teacher, but then, after hearing from the Lord that unless He washed his feet, he had no part with Him, gave way still more vehemently.

After washing their feet and displaying an extraordinary exaltation through humility, He took up His garments again and reclined, exhorting them to love one another and not to seek primacy. While they were eating, He introduced the subject of His betrayal.

The Disciples being perturbed at these words, Jesus said quietly to John alone: “He it is, to whom I shall give a sop, when I have dipped it” (John 13:26). He spoke in this way, for if Peter had known what He was saying, being more fervent than the others, he would have laid hands on Judas. Again, Christ says: “He that dippeth his hand with me in the dish, the same shall betray me” (Matthew 26:23).

Note that He calls His Body leavened bread, not unleavened bread. Let them be put to shame, therefore, who offer unleavened bread at the Eucharistic Sacrifice.
After Judas had tasted the sop, Satan entered into him, for, having previously tested him, he now completely dwelt in him. And he went and made an agreement with the chief priests, so that he might betray Christ for thirty pieces of silver. 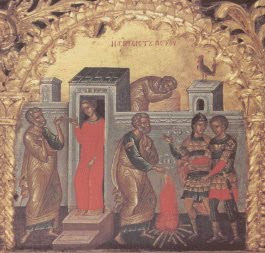 After the supper, the Disciples went out to the Mount of Olives, to a place called Gethsemane. After much time had passed, Jesus said to them: “All ye shall be offended because of me this night: for it is written, I will smite the shepherd, and the sheep shall be scattered. But after that I am risen, I will go before you into Galilee. But Peter said unto him, Although all shall be offended, yet will not I. And Jesus saith unto him, Verily I say unto thee, That this day, even in this night, before the cock crow twice, thou shalt deny me thrice” (Mark 14:27-30). He said, “before the cock crow twice,” because the cock typically does not crow once, but twice or thrice. This indeed happened, and Peter was seized by immeasurable fear, for God thereby revealed the infirmity of human nature. He also permitted this to occur because He had entrusted the inhabited earth to Peter. Knowing from his own case the fickleness of our nature, Peter might thereby provide forgiveness to sinners.

Aside from the foregoing, the threefold denial of Peter was an image of the sins of all men towards God: the first is the transgression of the commandment which God gave to Adam; the second is the transgression of the written law; and the third is the violation of the Gospel message. The Savior subsequently healed this denial through a threefold repentance on the part of Peter by asking him thrice: “Peter, lovest thou Me?” 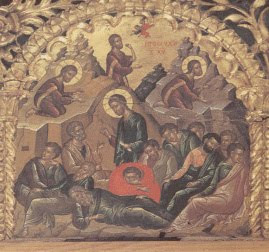 After this, wishing to disclose His humanity, He told the Disciples how fearful death is to all: “My soul is exceeding sorrowful, even unto death: tarry ye here, and watch with me. And he went a little further, and fell on his face, and prayed, saying, O my Father, if it be possible, let this cup pass from me: nevertheless not as I will, but as thou wilt” (Matthew 26:38-39).

He said these things, on the one hand, as a man, and on the other hand, in order to deceive the Devil in an artful manner into thinking that He, too, was a mere man because He supposedly feared death. He did this lest, knowing the truth, the Devil thwart the mystery of His death on the Cross.

After this first prayer, the Lord returned to the Disciples and found them sunk in sleep. Addressing Peter, He said: “What, could ye not watch with me one hour? Watch and pray, that ye enter not into temptation: the spirit indeed is willing, but the flesh is weak” (Matthew 26:40-41). He spoke this to Peter as if to say to him: “You, who said that you wanted to struggle unto death, are you just as drowsy as the others?”

“He went away again the second time, and prayed, saying, O my Father, if this cup may not pass away from me, except I drink it, thy will be done. And he came and found them asleep again: for their eyes were heavy. And he left them, and went away again, and prayed the third time, saying the same words. Then cometh he to his disciples, and saith unto them, Sleep on now, and take your rest: behold, the hour is at hand, and the Son of man is betrayed into the hands of sinners. Rise, let us be going: behold, he is at hand that doth betray me” (Matthew 26:42-46).

Then, after crossing the brook of Kedron, where there was a garden, He settled there with the Disciples. 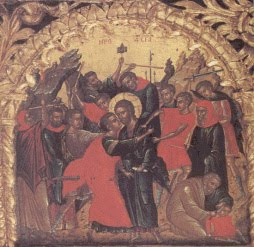 Since the Lord was wont to go thither regularly, for this reason Judas knew the place. Thus, after procuring a band of soldiers, and with a crowd following him, he went up to Jesus, having previously given them a sign, saying, “Whomsoever I shall kiss, that same is he: hold him fast” (Matthew 26:48). He said this because oftentimes the Lord, when apprehended, would disappear from their midst and go on His way. However, in this instance Christ first went forth to them and asked: “Whom seek ye?” (John 18:4).

They still did not recognize Him. Now, the night was not an impediment, for they had come with light lanterns and torches. And yet, they fell to the ground in fear and drew back. When they returned, He gave the same answer.

After Judas had given the signal, Christ said, “Friend, wherefore art thou come?” (Matthew 26:50), as though to say: “It is now time to fulfill the purpose for which you have come, Judas.” And again, He said: “Are ye come out as against a thief with swords and staves for to take me?” (Matthew 26:55). They had, in fact, come by night so as to forestall any sedition on the part of the people.

Then Peter, who was so very ardent, drew his sword (for it was after supper, and they had come prepared) and smote the servant of the high priest, Malchos by name, cutting off his right ear. Christ rebuked Peter, saying that it is not good that a spiritual man should be known for resorting to the sword, and He healed Malchos’ ear.
Having arrested Jesus, they led Him bound to the palace of the high priest, Annas, who was the father-in-law of Caiaphas. The Pharisees and scribes, who thought ill of Christ, were all assembled there. It was here that the incident involving Peter and the maidservant and his denial of Christ took place. The night having passed in the meantime, “the cock crew, and Peter remembered the word of Jesus, which said unto him, Before the cock crow, thou shalt deny me thrice. And he went out, and wept bitterly” (Matthew 26:74-75). 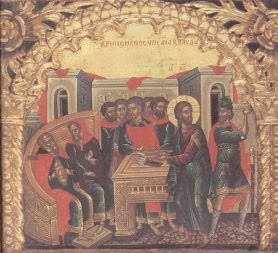 Towards daybreak they took Christ from Annas to the high priest Caiaphas, where He endured being spat upon and buffeted, and false witnesses were summoned. When day dawned, Caiaphas sent Him to Pilate. Those who led him “went not into the prætorium, lest they should be defiled, but that they might eat the passover” (John 18:28). We may conclude, therefore, that the chief priests and the Pharisees did something unlawful at that time in postponing the Passover, as the Divine Chrysostomos says; for they ought to have eaten it during the night, but postponed it so that Christ could be put to death.

That they ought to have eaten it then is shown by what Christ said before the supper on Thursday evening, when He ate the passover of the Law and then initiated the Disciples into the more perfect Passover. For, as we have said, it was necessary that the shadow of the Law be succeeded by the truth. For John says that all of these things occurred before the feast of Passover on Thursday and during the ensuing night. For this reason we keep feast, commemorating with awe those dread and ineffable deeds and acts.

By Thine ineffable compassion, O Christ our God, have mercy on us. Amen.

PrevPreviousTHE CHURCH OF RESURRECTION IN JERUSALEM
NextHOLY AND GREAT THURSDAYNext