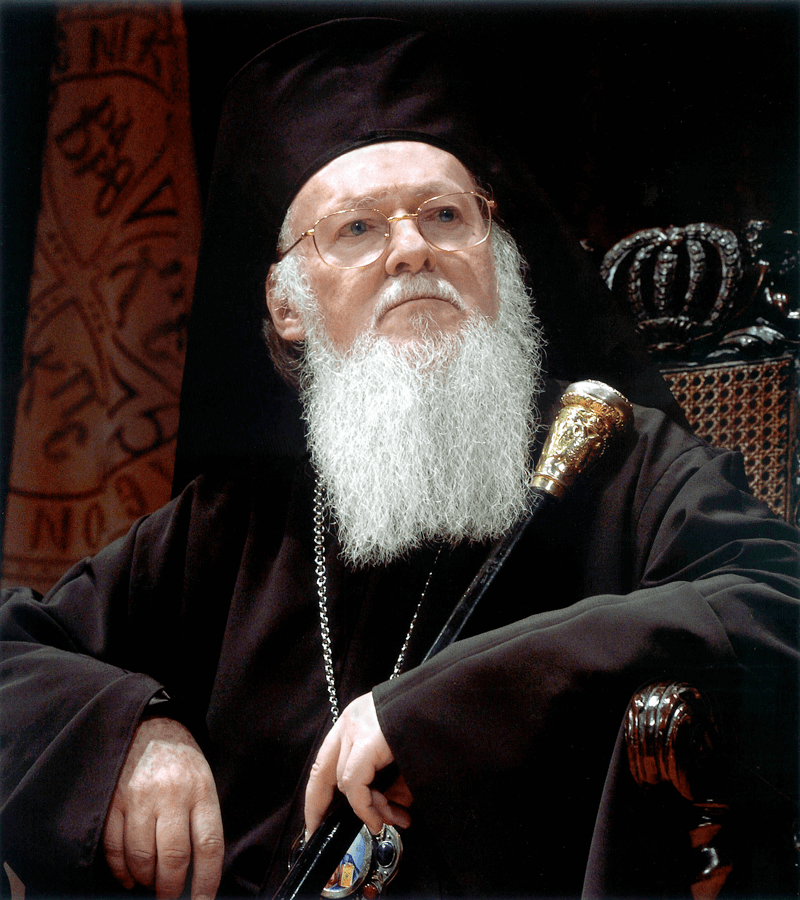 His All Holiness, BARTHOLOMEW, Archbishop of Constantinople, New Rome and Ecumenical Patriarch is the 270th successor of the 2,000 year-old local Christian Church founded by St. Andrew. As a citizen of Turkey, Patriarch Bartholomew’s personal experience provides him a unique perspective on the continuing dialogue among the Christian, Islamic and Jewish worlds. He works to advance reconciliation among Catholic, Muslim and Orthodox communities, such as in former Yugoslavia, and is supportive of peace building measures to diffuse global conflict in the region.

As Archbishop of Constantinople and New Rome, Patriarch Bartholomew occupies the First Throne of the Orthodox Christian Church and presides in a fraternal spirit among all the Orthodox Primates. The Ecumenical Patriarch has the historical and theological responsibility to initiate and coordinate actions among the Churches of Alexandria, Antioch, Jerusalem, Russia, Serbia, Romania, Bulgaria, Georgia, Cyprus, Greece, Poland, Albania, The Czech Land and Slovakia, Finland, Estonia, and numerous archdioceses in the old and new worlds. This includes the convening of councils or meetings, facilitating inter-church and inter-faith dialogues and serving as the primary expresser of Church unity as a whole. As Ecumenical Patriarch he transcends every national and ethnic group on a global level and today is the spiritual leader of approximately 250 million faithful world-wide.

In his person, Patriarch Bartholomew represents the memory of the life and sacrifice of the martyred Orthodox Church of the 20th Century. After ascending the Ecumenical Throne in 1991, he journeyed throughout the Orthodox and non-Orthodox world bringing a message of restoration and renewed hope. He has presided over the restoration of the Autocephalous Church of Albania and Autonomous Church of Estonia, and as been a constant source of spiritual and moral support to those traditionally Orthodox countries emerging from decades of wide scale religious persecution behind the Iron Curtain. The Patriarch is a living witness to the world of Orthodoxy’s painful and redemptive struggle for religious freedom and to the innate dignity of humankind.

Patriarch Bartholomew strives earnestly to prepare the Orthodox Church for its continuing role as a mediator between East and West. In his capacity as Ecumenical Patriarch, he has three times convened the leaders of the self-governing Orthodox Churches around the globe, challenging them to vigorously pursue solutions to the challenges of the new millennium, for example, by categorically condemning nationalism and fanaticism. Together with His All Holiness Pope John Paul II, Ecumenical Patriarch Bartholomew has supported progress toward the reconciliation of the Roman Catholic and Orthodox Christian Churches.

Patriarch Bartholomew’s roles as the primary spiritual leader of the Orthodox Christian world and a transnational figure of global significance continue to become more vital each day. He co-sponsored the Peace and Tolerance Conference in Istanbul (1994) bringing together Christians, Muslims and Jews. Most noted are his efforts in environmental awareness, which have earned him the title “Green Patriarch.” He has organized environmental seminars in co-sponsorship with His Royal Highness Prince Philip, and international environmental symposia on Patmos (1995) and around the Black Sea (1997). Since 1999 three other Religion, Science and the Environment International Symposia took place under the joint auspices of His All Holiness Ecumenical Patriarch Bartholomew and His Excellency Mr. Romano Prodi, President of the European Commission: Symposium III, which sailed down the Damude River; Symposium IV: “The Adriatic Sea: A Sea at Risk, a Unity of Purpose” (June 2002) and Symposium V: “The Baltic Sea: A Common Heritage, A Shared Responsibility” (June 2003). These endeavours, together with his inspiring efforts on behalf of religious freedom and human rights, rank Ecumenical Patriarch Bartholomew among the world’s foremost apostles of love, peace and reconciliation for humanity, a reason for which he was awarded the Congressional Gold Medal by the U.S. Congress.

See more about the Ecumenical Patriarch:

Message of his all holiness ecumenical patriarch

From the Phanar, from the heart of the Queen of Cities, from the City of the Great Church and of Haghia Sophia, we are communicating with each and every one of you – women, men, and children – because of the unprecedented conditions and tribulation that we are facing as a human race as a result of the global threat posed by the pandemic of the new coronavirus, called Covid-19.